The .357 Revolver is a .357 calibre double-action revolver manufactured by AC Tactical. It can load a maximum of 6 .357 rounds in its chamber.

A rare, named variant of the .357 Revolver exists, called the Grimey Rick.

The .357 Revolver uses a double-action trigger mechanism, which means that a single trigger pull cocks the hammer, and then releases the sear. In-game, this essentially turns the revolver into a semi-automatic weapon, albeit with a much lower rate of fire.

The .357 Revolver's The chamber only holds 6 rounds, limiting ammunition capacity. When reloading, spent cartridges will need to be ejected first, before the new cartridges are inserted into the chamber, one by one. This increases the weapon's reload time significantly, prompting most players to reload through their inventories instead. 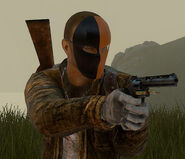 The player holding the .357 Revolver. Note the ammo clipping near the gun trigger. 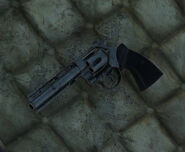