The Brute mutant, also referred to simply as the Brute, is one of the mutants in Miscreated.

The Brute is occasionally found wandering in any of the locations around Orca Island.

The Brute has a relatively small aggravation range, and will attack any players that wander too close and/or into its line of sight. Like all other mutants, the Brute is attracted to gunfire, explosions, whistles, movement noise, and VoIP transmissions.

When provoked, a Brute will continue to attack until it perishes, or kills its target. The Brute will not follow its target indefinitely it will stop attacking and return to its roaming once its target is out of its follow range. Brutes are sometimes accompanied by Mutant Hounds or other mutants.

The Brute is one of the largest and toughest mutants found on Orca Island. It appears to have experienced extensive physical mutations, with the most obvious traits being its abnormally increased muscle mass and enormous bulk.

Brutes may sometimes spawn with plates of bone armour, covering the head and chest area.

Brutes have an inventory and drop various loot. Brutes are known for fairly decent drops, including the occasional crafting guide.

In combat, the Brute charges towards its enemies and attacks with physical blows, using its claws as melee weapons. Every hit it lands does 20% of damage to health, with a chance of causing bleeding to their targets. 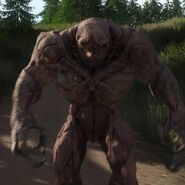 Close-up of the Brute.

A dead Brute.
Community content is available under CC-BY-SA unless otherwise noted.
Advertisement