The Frag Grenade is a throwable weapon. It can only be equipped in a Secondary Slot.

The Frag Grenade is a high explosive fragmentation hand grenade. It is a timed explosive that detonates a few seconds after being thrown, causing wide area damage, with the potential of killing or wounding multiple players or mutants at once.

Frag Grenades are usually found in military structures, such as army tents or barracks. 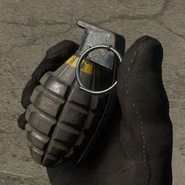