Edit
watch 01:36
We're Getting Mutants in the MCU - The Loop
Do you like this video?
Play Sound

The Giant Scorpion is an aggressive animal found in Miscreated.

Giant Scorpions spawn at random when looting world objects, such as foot lockers or trash piles. Players may also encounter them at random while roaming.

As its name implies, the Giant Scorpion is a large, mutated scorpion. It is an eight-legged, brownish arachnid, easily recognised by its pair of clawed pedipalps, and a distinctive, curved tail that ends with a stinger.

In combat, the Giant Scorpion charges towards its enemies and attacks with bites, doing 3% of damage to health per hit, at a rate of 1 bite per second. 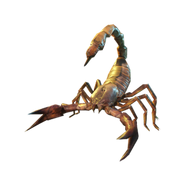