The Hockey Mask is a wearable item. It can only be equipped in the Face Slot.

The Hockey Mask provides minimal protection against the elements.

"Hockey masks might have originally been used to protect vital sensory organs during recreational sports activities, but they hold up just as well during recreational killing. Whether you sport a Survival Knife or a firearm, nothing quite tells the opposition that you mean business like wearing a Hockey Mask." – Klavian

"Hockey Masks are a rather rare find on Orca Island, possibly due to the lack of proper hockey arenas. The protection they offer against anything more lethal than a puck is minimal at best, but their psychological advantage can be lethal." – Klavian 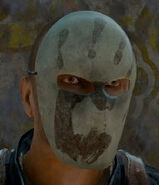 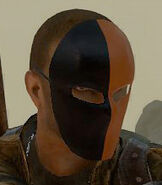