The Hunting Knife is a melee weapon. It can only be equipped in a Secondary Slot.

The Hunting Knife is a lightweight, multi-purpose knife adapted for use in the wild. It features a fixed, slightly curved blade with a serrated spine.

As a weapon, the Hunting Knife does 24% of damage to health for every hit, with a 70% chance of causing bleeding to its target. Where it lacks in damage, the knife's short blade and light weight give it a higher rate of attack compared to two-handed melee weapons.

The Hunting Knife does the same damage as the Survival Knife, but has a higher chance of causing bleeding to enemies. The Hunting Knife is also lighter, allowing for a faster rate of attack, giving it a higher overall Damage Per Second rating.

Hunting Knives are usually found in military structures such as army tents or barracks. They may also spawn in residential areas, stores and supermarkets, and sometimes industrial areas like garages and warehouses. 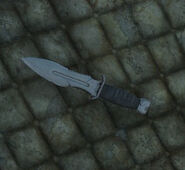