The Katana is a melee weapon. It can only be equipped in a Primary Slot.

The Katana is a curved, single-edged sword with a circular guard and long grip to accommodate two hands.

As a weapon, the Katana does 49% of damage to health for every hit. Unlike the Katana, each hit grants a 90% chance of causing bleeding to its target. The Katana makes up for its low attack speed with its longer range and higher damage.

Katanas is usually found in military structures such as army tents or barracks.

A rare, named variant of the Katana exists, called the Black Widow. 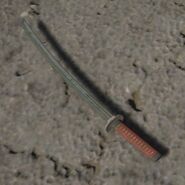