The MP55 is a ranged weapon that fires 10mm Rounds. It can only be equipped in a Primary Slot.

The MP55 is a German selective-fire, magazine-fed, 10mm submachine gun. It fires up to 30 10mm cartridges from the 30Rnd MP55 10mm magazine.

The MP55 features a solid, fixed stock, and Navy trigger group with a fire mode selector, giving users the option to switch between Semi and Rapid (semi and fully automatic, respectively) fire.

The weapon model also features a dedicated forend for a weapon flashlight, and a claw lock-on scope mounts on the top of the barrel/receiver group, although these appear to be purely cosmetic, and unusable. 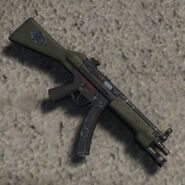