The Mutant Hound is one of the mutated wildlife found in Miscreated.

The Mutant Hound may be found wandering around random locations throughout Orca Island.

Unlike Wolves, Mutant Hounds roam alone and do not travel in packs. They may sometimes be found accompanying Brute mutants.

The Mutant Hound is a two-headed mutant quadruped. Judging from the loot found on its carcass, it can be implied that the Mutant Hound is a mutated version of the wolf. Its mutations have caused it to be stripped almost completely of its skin, with of its muscle tissue visible throughout its body.

In combat, the Mutant Hound charges towards its enemies and attacks with bites, doing 10% of damage to health per hit.

A Mutant Hound carcass will always contain the following: 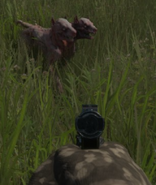 A player taking aim towards a Mutant Hound with a MKIII .22 handgun.
Add a photo to this gallery
Retrieved from "https://miscreated.fandom.com/wiki/Mutant_Hound?oldid=20900"
Community content is available under CC-BY-SA unless otherwise noted.