The Vector is a ranged weapon that fires 10mm Rounds. It can only be equipped in a Primary Slot.

The Vector is a selective-fire, magazine-fed, 10mm submachine gun. It fires up to 15 10mm cartridges from the 15Rnd Vector 10mm magazine.

The Vector features iron sights, and a Picatinny rail for additional weapon accessories. The weapon model also features a folding stock, and an integrated weapon light receptacle above the barrel, although these appear to be purely cosmetic, and unusable.

Two of the most important things to note about Vector are its high rate of fire, as well as its magazine size of 15 rounds. This results in the weapon emptying its magazine very quickly, necessitating more frequent reloads.

The following weapon skins are available for the Vector:

Close-up of the Vector. 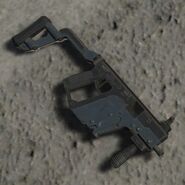